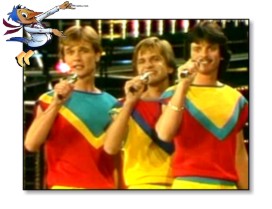 Westend was an Austrian pop group.

They were best known for representing their country at the Eurovision Song Contest 1983 in Munich with the song Hurricane, which finished in 9th place.

Retrieved from "https://eurosong-contest.fandom.com/wiki/Westend?oldid=25887"
Community content is available under CC-BY-SA unless otherwise noted.