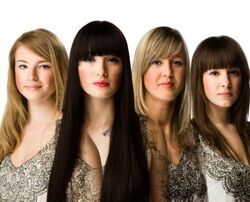 They were chosen to represent their home country in the Eurovision Song Contest 2009 with the song Rändajad, which successfully qualified for the final, finishing in 6th place, giving the country its best result since 2002.

Retrieved from "https://eurosong-contest.fandom.com/wiki/Urban_Symphony?oldid=29972"
Community content is available under CC-BY-SA unless otherwise noted.