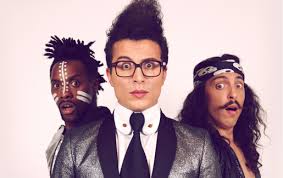 Twin Twin are a French music trio that was founded in 2010. They are known for their mix of punk, electro, hip hop, and slam, as well as their unique visual style.

Not long after they started, they received a number of awards, and opened for such artists like VV Brown. After releasing a number of singles, they released their debut album in 2013.

They represented France in the Eurovision Song Contest 2014 in Copenhagen, Denmark, with the song Moustache after winning a three artist national final. They finished last with just 2 points, making it the first time France had done so poorly in the contest.

Retrieved from "https://eurosong-contest.fandom.com/wiki/Twin_Twin?oldid=38987"
Community content is available under CC-BY-SA unless otherwise noted.