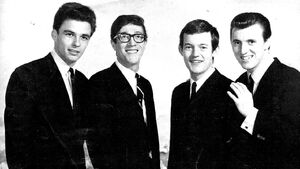 Let Me Be The One

The Shadows are an English instrumental rock group and Cliff Richard's backing band. They were the first backing band to emerge as stars and the core members are Hank Marvin, Bruce Welch and Brian Bennett. Along with Cliff Richard, they dominated British popular music in the late 1950s and early 1960s in the years before the Beatles. They are the third most successful act in the UK singles chart, behind Elvis Presley and Cliff Richard. The band and Cliff Richard & The Shadows each have had four No.1 selling EPs.

They were chosen by BBC Head of Light Entertainment Bill Cotton as a possible representative for the country in the Eurovision Song Contest 1975 in Stockholm and took part in the televised national selection show "It's Lulu", where after eight weeks and having performed six songs, the public voted for Let Me Be The One to go to the Eurovision final. There, they came second to the Dutch entry Ding-a-Dong by the group Teach-In.

Author and historian John Kennedy O'Connor notes in The Eurovision Song Contest: The Official History that they were not a popular choice to represent the country and the viewers' postal vote was the lowest in the national final's history. However, their Contest appearance re-established the band and the single climbed to #12 in the UK chart. An album of new material, including vocal and instrumental tracks "Specs Appeal", coincided with their Eurovision appearance.

They hve remained extremely popular since their Eurovision appearance and continue to tour to this day.

Retrieved from "https://eurosong-contest.fandom.com/wiki/The_Shadows?oldid=28561"
Community content is available under CC-BY-SA unless otherwise noted.