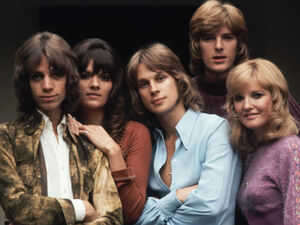 The New Seekers are a British-based pop group, formed by Keith Potger in 1969 after the break-up of the original Australian group, The Seekers. The group had an ever-changing lineup, just like Brotherhood of Man and Wind.

They were chosen to represent the United Kingdom in Edinburgh as host for Monaco (whose broadcaster couldn't afford to stage the contest) in 1972 with the song Beg, Steal or Borrow, which was chosen by the British public on the show "It's Cliff Richard!"

The line-up for the 1972 Eurovision was; Eve Graham and Lyn Paul on lead vocals, Paul Layton on bass, and Marty Christian and Peter Doyle on guitar. All members had vocal input.

After Eurovision, the group had some successes in Australia, the UK, Ireland and the USA which dwindled down after a while.

Retrieved from "https://eurosong-contest.fandom.com/wiki/The_New_Seekers?oldid=27156"
Community content is available under CC-BY-SA unless otherwise noted.