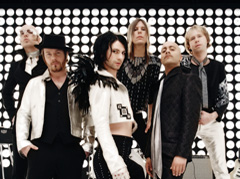 The Ark was a Swedish glam rock band formed in 1991. Lead singer Ola Salo was the main songwriter and his lyrics were sometimes seen as controversial.

They won the right to represent their home country in the 2007 Contest in Helsinki, finishing in 18th place.

In 2010, they announced their intention to go their separate ways after the release of a greatest hits compilation. Throughout their career they won numerous awards and were lauded as the most successful Swedish band since ABBA. They made their last appearance on 16 September 2011 at the "Gröna Lund" amusement park in Stockholm.

Retrieved from "https://eurosong-contest.fandom.com/wiki/The_Ark?oldid=26999"
Community content is available under CC-BY-SA unless otherwise noted.