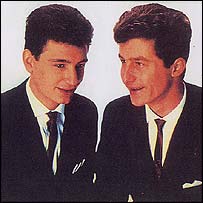 The Allisons were an English pop duo who represented the United Kingdom in the Eurovision Song Contest 1961 with the song "Are You Sure?". They came second with 24 points.

The song was released as a single on the Fontana Records label, and climbed to number 1 on the UK NME pop chart, while the song spent six weeks at number 2 and a further three weeks in the top 4. "Are You Sure" sold over one million records, earning a gold disc. In Germany the single reached number 11. Despite a couple of minor follow-up hits, the duo disbanded in 1963.

Alford initially tried songwriting, but he and Day teamed up for short tours to keep the 'Allisons' name alive. Additionally, in the 1970s and 1980s Alford was joined by other "brothers" — Mike "Allison" and Tony "Allison". By the 1990s, Day and Alford regularly reunited to perform on the oldies circuit.

Retrieved from "https://eurosong-contest.fandom.com/wiki/The_Allisons?oldid=31900"
Community content is available under CC-BY-SA unless otherwise noted.