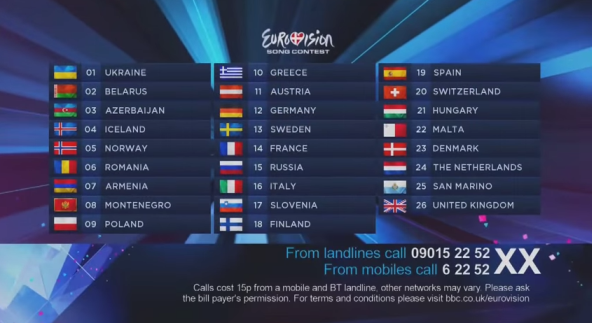 Televoting
The United Kingdom's televoting list for the 2014 grand final
Televoting, or voting by telephone, was first introduced at the Eurovision Song Contest 1997 as an alternative to the traditional jury system and was tested by five countries - the rest used the jury system.  By 2004, all participating countries used this system.  Since the 2009 finals, televoting now makes up 50% of a country's total score with the remaining 50% coming from a jury of five music professionals from each participating country which are then combined.  The 50:50 system proved so successful that it was extended into the semi-finals for the 2010 contest and has remained in place ever since to not only determine the overall winner, but to also pick the ten qualifiers from each semi-final.

San Marino is the only participating country that does not have its own independent televote system as it shares Italy's phone network.

At the start of the live shows (semis and final), the running order is shown on screen as shown in the photo above, with a two-digit number beside each country's name, and a number to call at the bottom of the screen - each country's numbers and calling/texting charges varying from one another.  XX is replaced by the two-digit number of the country the individual wants to vote for.  As is customary, a country cannot vote for its own song, and either a warning or a good luck message to their representative would be shown by their home broadcaster on screen during the recaps when their own country's song came up, or the space reserved for the phone number is simply left empty.

Since 2014, fans can also vote via the official Eurovision mobile app. Availability and costs to vote through this method varies by country.

After the last song is performed, there will be a 15-minute window for voting (the presenters would announce when the window opens), which could be used on one country or split among as many countries as the voter chose to vote for, and a recap of all the songs would be shown at least twice during that window.  From 2009 until 2011, people could vote right from the first song, but in 2012 it reverted to the 15-minute window following the last song of the night.  In 2014, there was a maximum of 20 votes per person allowed.

The window closed with the words "Europe, stop voting now!" announced by the presenters. Before the results, one of the presenters would consult with the Executive Supervisor to confirm the counted votes are valid before proceeding.

Since 2016, televoting makes up a separate set of points. While the jury votes are tallied and announced in the traditional manner, the televotes from all participating countries are combined and awarded in ascending order in the final from the country who received the least amount of points to the one receiving the most amount of points. This was done to create more suspense and excitement for the viewers as in recent years, the winner was usually announced when it was mathematically impossible for rivals to catch the leader even with several countries still left to reveal their votes.

In 2019, a twist was added to the televote announcement procedure for the final. The televotes would be counted and combined as normal, but the results would be announced by the presenters according to the countries' placement after the jury vote. Meaning, the country that was ranked last with the juries would receive their televote score first and so on up the list, with the country that the juries ranked first receiving their televote result last. When it gets down to the last country still needing to receive their points, the presenters would announce how many points it would need to pass the country currently in the lead in order for it to win.

As of 2017, commentators read out how their respective country's public voted in the grand final upon its conclusion, with the results posted on screen.

Retrieved from "https://eurosong-contest.fandom.com/wiki/Televoting?oldid=41475"
Community content is available under CC-BY-SA unless otherwise noted.