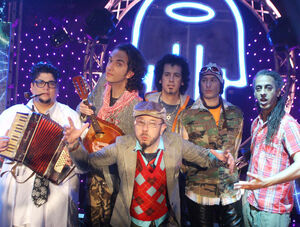 Teapacks is an Israeli band, founded in 1988 under the name HaHotzaa LaPoal ("The Execution"). Each member of the band has a diverse background, and as a whole the band has Tunisian, Moroccan, Bulgarian, Romanian, Syrian, Polish, Russian, and Yemenite heritage. Teapacks gained popularity by bringing forward traditional Israeli-oriental music combined with light humorous hints.

It started when vocalist/keyboardist Kobi Oz and bassist Gal Peremen met in a kibbutz in southern Israel, and then began playing songs written by Oz, which brought guitarist Einav Cohen and drummer Tamir Yemini into the group. After releasing their first two singles, the latter two left the group and were replaced by Yoav Nagar and Ram Yosifov. The group went through multiple shifts, to the point where Oz, Pereman, and Yosifov were the only permanent members to this day. They changed their name to Tipex to represent how they wanted to wipe out differences between people.

In September 1992, they released their debut album, Shvil klipot hagarinim, which contained he hit single "Harabi Joe Capara" (Rabbi Joe Capara); their follow-up album was released in 1993 with the hits "Betoch niyar eiton" (Rolled Up in a Newspaper), "Zmanim ktanim" (Small Times) and "Anana" (Cloud). They changed their name again in 1995 to Teapacks after Oz learned that Tip-pex was used as a drug.

Throughout the nineties, they recorded a wide variety of albums and singles, including the soundtrack for the Israeli comedy film Dogs are Colour Blind and the single "Lama halacht mimenu" (Why Did You Leave Me?), which featured the future Eurovision Song Contest 2002 participant Sarit Hadad.

They were internally selected by the Israeli IBA to represent the country at the Eurovision Song Contest 2007 in Helsinki. Afterward, they performed four songs on a public television show, with the song Push the Button being chosen to represent the country. Performed in English, French, and Hebrew, it garnered controversy because its lyrics hinted at nuclear warfare, specifically with Iran. While they were cleared to participate, they finished 24th in the semi-final, failing to qualify to the final.

Teapacks broke up for the first time in 2009, due to the band members getting tired of working with each other. Oz released two solo albums, Mizmorei nevochim (Psalms for the Perplexed) and Mizmorim nosafim (More Psalms), while Yosifov concentrated on teaching guitar and collaborated with Moran Cohen-Talmor on several albums. However, in 2014, they reunited to record music and tour together.

Retrieved from "https://eurosong-contest.fandom.com/wiki/Teapacks?oldid=35209"
Community content is available under CC-BY-SA unless otherwise noted.