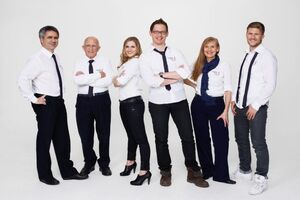 Takasa, also known as Heilsarmee is a Swiss band made up of Sarah Breiter, Jonas Gygax, Katharina Hauri, Christoph Jakob, Emil Ramsauer, and Michel Sterckx. They represented Switzerland in the 2013 edition of the Eurovision with the song You and Me, winning the Swiss national final with over a third of the total vote - 20% more than their nearest competitor. Emil is the oldest ever Eurovision performer, at the time of the contest in Malmo he was 95 years old.

They finished 13th out of 17 countries in the second semi-final with 41 points, missing out on the final. Though ranked 16th out of 17 by the juries, they were liked enough by the public to finish 5th in the televote.

The group used to be called Heilsarmee, which is German for The Salvation Army, were ordered by the EBU two days after winning the Swiss final to change the name of their group, as religious related content is against the rules, and on 25 January 2013 SRF agreed to the EBU's request.  In March of 2013, their new name was revealed along with a new video for their song.

The word Takasa means "to purify" in Swahili, but some fans believe that the name is an acronym that stands for "The Artists Known As the Salvation Army". They were also required to switch their Salvation Army uniforms for casual clothes, as that falls under the same rule.

Retrieved from "https://eurosong-contest.fandom.com/wiki/Takasa_(Heilsarmee)?oldid=17022"
Community content is available under CC-BY-SA unless otherwise noted.