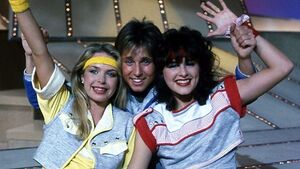 Sweet Dreams was an English trio consisting of Bobby McVay, Carrie Gray and Helen Kray. They were specifically put together to perform in "A Song for Europe" and drew comparisons to Bucks Fizz who had won the Contest in Dublin two years previously.

They finished in 6th place overall and post-Contest, they released a follow-up single "17 Electric (Look Out!)" in August 1983. However, it failed to chart, leading to the band calling it a day by the end of the year.

Former member Bobby McVay became a radio presenter and was invited to join Bucks Fizz on the 2015 UK reunion tour.

Carrie Gray married singer David Grant and became a judge on BBC's Fame Academy from 2002-2004. She was the spokesperson for the United Kingdom in the 2008 contest in Belgrade. She also served as the chairperson of the United Kingdom's jury for the 2014 Contest.