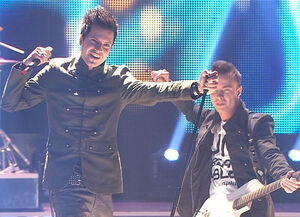 Sinplus is a Swiss band made up of brothers Ivan and Gabriel Broggini. They represented Switzerland at the Eurovision Song Contest 2012 in Baku with the song Unbreakable. The duo finished in 11th place in their semi-final, missing out on qualification by 7 points.

They have released 2 albums and 5 singles, and in 2014 won the MTV Europe Music Award for Best Swiss Act.

Ivan served on the Swiss jury for the 2014 contest in Copenhagen while Gabriel followed as a juror for the 2015 contest in Vienna.

Retrieved from "https://eurosong-contest.fandom.com/wiki/Sinplus?oldid=15124"
Community content is available under CC-BY-SA unless otherwise noted.