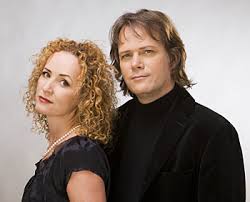 Secret Garden are an Irish-Norwegian duo, consisting of Fionnuala Sherry and songwriter Rolf Løvland, and playing mainly Irish instrumental music, or neo-classical music. The duo have sold over 3 million albums since their win at the Eurovision Song Contest 1995. The two met in 1994 when Fionnuala was performing as a member of the orchestra during the 1994 contest.

Gunnhild Tvinnereim and Åsa Jinder performed with Secret Garden as guests in the live performance, with Gunnhild singing the song and Åsa playing a nyckelharpa. Fionnuala performed the violin solo in their song, Nocturne.

Rolf Løvland also wrote Norway's previous winning entry, La Det Swinge, in 1985 for Bobbysocks!, another duo. He would also go on to write "You Raise Me Up" with fellow 2-time winning composer Brendan Graham, which was later covered by the Irish group Celtic Woman and would become a big hit for American singer Josh Groban.

Retrieved from "https://eurosong-contest.fandom.com/wiki/Secret_Garden?oldid=26569"
Community content is available under CC-BY-SA unless otherwise noted.