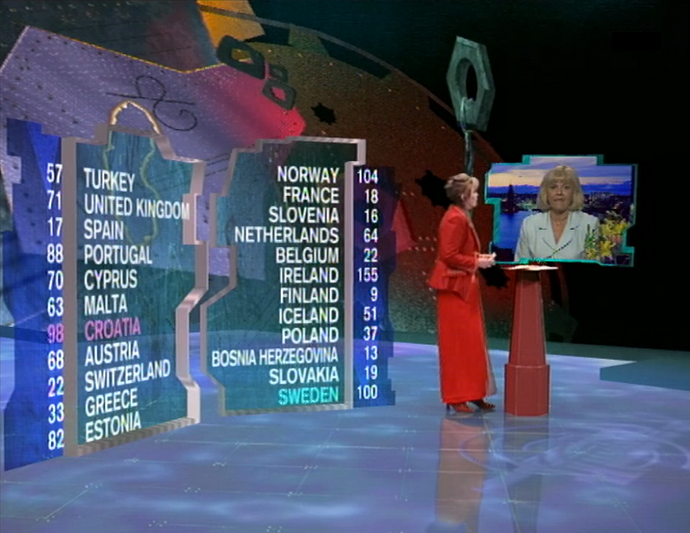 Scoreboard
"Will Sweden give us any points this year?!"

The Scoreboard is used in the Eurovision Song Contest to display all the votes from the various countries, and has changed in various styles and operations throughout the years.

Behind the older scoreboards, are operators who display the countries and numbers, and sometimes the scoreboard does go a little awry, with the wrong country's points being updated, a delay in updating, or the scoreboard changes color, such as the 1984 scoreboard.  The first computer-generated scoreboard was used at the 1988 contest in Dublin. Jury spokespersons also gave their votes through the phone or have the Jury present in the hall, before there were satellites beginning in 1994 to transmit spokespersons from their own country and displayed on screen.

In 1996 and 2014 there were holographic versions of the scoreboard on stage (2014's being in the big LED grid) which were also shown on the television in graphic format.

Nowadays, computers are used and are more accurate with more fancy graphics, but they don't create some of the funny moments that they've had in previous years. After 2006, the EBU decided to save some time when voting, instead of each point being read out individually, points 1-7 were already allocated and the spokesperson only has to read out points 8, 10 and 12. The voting still takes about an hour even with this method, due to the number of participating countries.

But sometimes the voting spokesperson does mess up their votes, tries to draw things out for added suspense, or just wants to play funny.

In 2012, the Swedish spokesperson was the character "Lynda Woodruff" (aka Sarah Dawn Finer), who is known for various funny sketches throughout Eurovision shows. This caused some laughter.

Since 2016, with the the total split between the jury vote and the televote, the spokesperson only announces which country got 12 from their country's jury, with 1-8 and 10 points pre-allocated to the scoreboard.

The 1957 scoreboard
Add a photo to this gallery
Retrieved from "https://eurosong-contest.fandom.com/wiki/Scoreboard?oldid=45259"
Community content is available under CC-BY-SA unless otherwise noted.