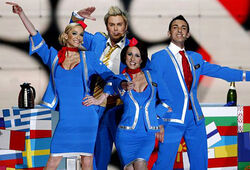 Flying the Flag (For You)

Scooch are a British bubblegum dance group consisting Natalie Powers, Caroline Barnes, David Ducasse and Russ Spencer. They began their career in 1999 after winning a contest on Saturday morning children's TV show "Live & Kicking" and went on to score four UK Top 20 singles in the space of a year. Although their debut album was a success in Japan, their follow-up album "For Sure" peaked just outside the UK Top 40. Following this they were dropped by their label and split.

They reunited four years later for a one-off concert before reuniting a second time in 2007 in order to take part in the UK national final "Making Your Mind Up" for the Contest in Helsinki. They made it into the Top 2 of the public vote but when the winner was announced there was much confusion since both presenters said a different name until it was revealed that Scooch had received more votes and thus would be representing the nation in Helsinki.

Unfortunately, their song Flying the Flag (for You) finished joint 22nd out of 24 entries after receiving 19 points in the final. However, it reached number 5 in the UK Top 40 Singles Chart on 13 May 2007 after having been available for download for two months prior.

They still remain active as a group but have not released any new material.

Retrieved from "https://eurosong-contest.fandom.com/wiki/Scooch?oldid=39685"
Community content is available under CC-BY-SA unless otherwise noted.