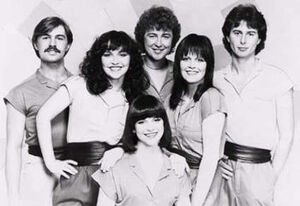 Prima Donna were the United Kingdom representatives in the Eurovision Song Contest 1980 in The Hague, performing the song Love Enough For Two, finishing in third place with 106 points.

The group comprised sisters Kate Robbins and Jane Robbins, Sally Ann Triplett, Danny Finn, Alan Coates and Lance Aston (brother of Jay Aston, who would perform with Bucks Fizz, the following year's contest winners). Finn was a former member of The New Seekers and was married to fellow ex-Seeker Eve Graham. Robbins later embarked on a successful career as a comedienne, impressionist and actress.

After the Contest, the group released one more single in September 1980, "Just Got to be You", but failed to chart. They disbanded soon after, with member Kate Robbins scoring a UK No.2 hit single a few months later.

Triplett returned to Eurovision in 1982, as one half of the group Bardo, who although didn't win scored a big hit with the song One Step Further, which reached No.2 in the UK Charts. Aston tried again to reach the Eurovision final, performing with another ex-New Seeker Kathryn Ann Rae, in the 1983 A Song For Europe contest, as part of the group Audio. They finished fourth of the eight shortlisted entries with the song "Love On Your Mind", written by Trevor Spencer and Marty Kristian, another New Seeker. Jane Robbins', sister, Emma Robbins, also had another attempt at the UK Eurovision ticket, in 1989 as part of female quartet The Pearls. They were also placed fourth of eight entries in the contest with the song "Love Come Down". Danny Finn retired from music to work for a kitchen design company, reverting to his original name, Kevin. Alan Coates went on to be a songwriter, while Kate Robbins forged a successful career as a singer, actress and comedienne (but not in the Royal).

Retrieved from "https://eurosong-contest.fandom.com/wiki/Prima_Donna?oldid=16917"
Community content is available under CC-BY-SA unless otherwise noted.