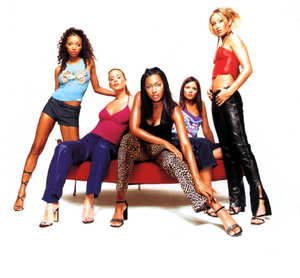 Precious was an English girlband who represented the United Kingdom in the Eurovision Song Contest 1999 in Tel Aviv with the song "Say It Again". The band was formed in 1998 and the following year they were chosen as the UK's representative for Eurovision. In spite of the single peaking in the UK charts at #6, they failed to win the contest, finishing in joint 12th place.

Post-Contest, they released an album and had minor success before disbanding in 2000. Band member Jenny Frost went on to replace Kerry Katona in the girlband Atomic Kitten.

Retrieved from "https://eurosong-contest.fandom.com/wiki/Precious?oldid=32615"
Community content is available under CC-BY-SA unless otherwise noted.