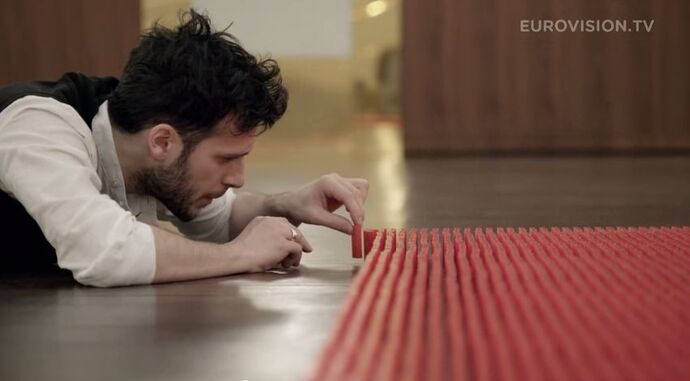 Pre-Song Postcards
Sebalter creates his flag in the 2014 Swiss postcard.

The pre-song postcards were introduced at the Eurovision Song Contest 1970 in Amsterdam to introduce each participating country and artist. They were introduced to "waste time" during the contest due to the low number of entrants. In later years, their purpose expanded to allow sufficient time for backstage crew to prepare for the next performance, such as stage cleaning or assembling of props.

The postcards showcased different aspects over the years: many featured scenes of local life or different points of interest around the host country, others featured the artists in various scenarios. Some even had a humorous tone at each country's expense as shown in the 1979 and 1984 postcards. The 1978 contest did not have the inter-song postcards (various shots of the artists backstage were used to introduce the performances), and in the 1980 contest, each country was introduced by a representative speaking in their native language.

Since 2013, the postcards increased their focus on the artists and shifted away from life in the host country, with the intention of "connecting the host city with Europe, and the viewers with the artists between each song".[1]