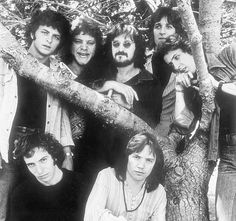 Kavaret, also known internationally as Poogy, was an Israeli rock band known for its humorous songs and unique style of music. They were considered Israel's equivalent to the Beatles because of their breakthrough status.

Danny Sanderson, one of their members, wrote a rock opera in 1972. When the members left the army, they refined it. The band was signed by producer Avraham Deshe (Pashanel), who convinced the band to give up the rock opera idea and put up a revue show composed of songs and skits. The updated show became a huge success. This became their debut album, Poogy Tales, which was released after the Yom Kippur War. While it initially didn't get much radio play due to its brand of humor, it became a critical and commercial success. In the Israeli Annual Hebrew Song Chart, the band was voted "Band of the Year" in both Galei Tzahal and Israel Broadcasting Authority, a feat that they would repeat for the next four years.

In March 1974, they were selected to represent Israel at the Eurovision Song Contest 1974 in Brighton; they performed with the song Natati La Khayay. It came in 7th with 11 points; afterwards, they released two English songs based on two Hebrew ones. That same year, they released their second album. In 1975, they released their third album, which got mixed reception.

In 1976, they tried to break through into the U.S. market through a tour and releasing English songs; however, they weren't able to get a record deal. Combined with in-fighting between the members, it ultimately led to their breakup.

Retrieved from "https://eurosong-contest.fandom.com/wiki/Poogy?oldid=34670"
Community content is available under CC-BY-SA unless otherwise noted.