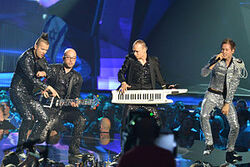 PeR is a Latvian pop and beatboxing band formed in 2007. Their name stands for "Please Explain the Rhythm" and the original line-up was Ralfs Eilands, Emīls Vegners, and Pēteris Upenieks. Vegners left the band in 2007 and was replaced by Edmunds Rasmanis. But when Upelnieks left the trio in 2011, he was not replaced, rendering the band a duo consisting of just Eilands and Rasmanis.

On 21 July 2007, the band first appeared and performed on Dziesma manai paaudzei, the Latvian music festival. After the festival, the band travelled to Moscow, Russia, to compete with other artists on the talent show Minuta Slavy (Minute of Fame), with the band coming in fourth place during voting. The band returned to Latvia where they received an invitation to participate in the annual music event Bildes 2007. This was the last event with the original members.

In 2008, Emīls Vegners left the band and was replaced by Edmunds Rasmanis. The band gained popularity appearing on the first series of the Latvian television station LNT contest Latvijas zelta talanti, the group managed to reach the final, but failed to win. After the contest, the band performed at many events, including the 2009 edition of Muzikālā banka.

After three failed attempts to represent their home country at Eurovision, they finally won the right in 2013 when they entered two songs into the national final and Here We Go! was selected as the winner. They performed the song first in the second semi final but finished in last place, marking the third time that the country had done so, having previously been in that position in 2009 and 2010 respectively.

Ralfs Eilands was one of the five jurors for Latvia in the 2015 contest in Vienna.

Retrieved from "https://eurosong-contest.fandom.com/wiki/PeR?oldid=21499"
Community content is available under CC-BY-SA unless otherwise noted.