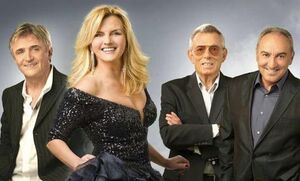 Novi Fosili is a Croatian pop band formed in 1969 and got their first big success in 1976. Their albums have sold millions of copies over the years and their songs are still played on Croatian radio to this day.

They represented the former Yugoslavia at the Eurovision Song Contest 1987 with the song Ja sam za ples. Leading in the first 4 rounds of voting, they eventually finished in 4th place with 92 points.

The most memorable lineup, which includes singer Sanja Doležal, are still working together since reuniting in 2005 for revival concerts.

Retrieved from "https://eurosong-contest.fandom.com/wiki/Novi_Fosili?oldid=32889"
Community content is available under CC-BY-SA unless otherwise noted.