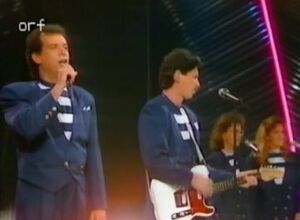 Nevada was a Portuguese duo made up of Jorge Mendes and Alfredo Azinheira.

They represented Portugal at the Eurovision Song Contest 1987 with the song Neste barco à vela, finishing in 18th place. After the contest, Mendes left the group and Azinheira, along with backing singers Carla Burity and Fernanda Lopes, continued the band as a trio and released an album called "On The Other Side" in 1988.

Retrieved from "https://eurosong-contest.fandom.com/wiki/Nevada?oldid=15673"
Community content is available under CC-BY-SA unless otherwise noted.