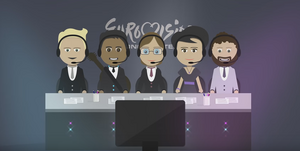 The Jury, described by the EBU as a National Jury, play a very important part in the Eurovision Song Contest voting system. Each national jury consists of five people (excluding one backup juror), with one of them designated as the jury's Chairperson.

Rules of the Voting Jury

Retrieved from "https://eurosong-contest.fandom.com/wiki/National_Jury?oldid=41599"
Community content is available under CC-BY-SA unless otherwise noted.