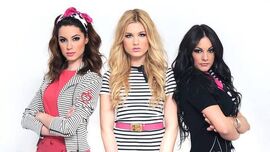 Moje 3 is a Serbian pop-dance girl trio made up of Mirna Radulović, Nevena Božović, and Sara Jovanović. They all met during the second season of The First Voice of Serbia and were all placed on the same team, finishing first, second and third in the final.

They represented their country at the Eurovision Song Contest 2013 in Malmo with the song Ljubav Je Svuda, finishing in 11th place and failing to qualify for the final. They were also the winners of the 2013 Barbara Dex Award for that year's worst-dressed artist in the contest.

They disbanded as a trio after the contest and are focusing on solo careers.

Nevena represented Serbia as a soloist at the Eurovision Song Contest 2019 in Tel Aviv.

Retrieved from "https://eurosong-contest.fandom.com/wiki/Moje_3?oldid=38553"
Community content is available under CC-BY-SA unless otherwise noted.