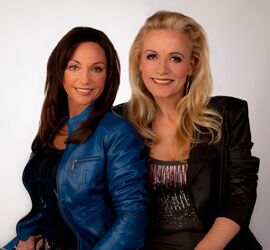 Maywood are a Dutch pop duo consisting of sisters Alie and Doetie de Vries. In the 1970s they sang with many different bands before forming a duo named De Karinas which they later changed to Maywood. They released English-language dance-pop songs and had many Top 40 hits in their homeland throughout the 1980s.

They were selected to represent their home country at the 1990 Contest in Zagreb but finished in a lowly 15th place.

In 1995, they went their separate ways to pursue solo careers with little success. In 1999, they fought for the right to use the name Maywood.

In 2013, they reunited as a duo, thanks to Gerard Joling, and in October of that year they appeared together onstage at the Ziggodome in Amsterdam.

Retrieved from "https://eurosong-contest.fandom.com/wiki/Maywood?oldid=31708"
Community content is available under CC-BY-SA unless otherwise noted.