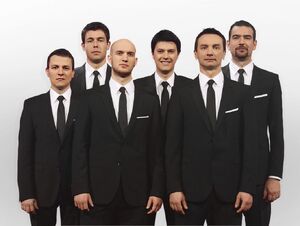 Klapa s Mora is a music ensemble that represented Croatia in the Eurovision Song Contest 2013 in Malmö with the song Mižerja.

During their performance, the members presented themselves in traditional outfits worn by the Sinjska alka competitors. Sinjska alka, as well as the klapa style of singing is included in the UNESCO Intangible Cultural Heritage Lists.

Retrieved from "https://eurosong-contest.fandom.com/wiki/Klapa_s_Mora?oldid=32606"
Community content is available under CC-BY-SA unless otherwise noted.