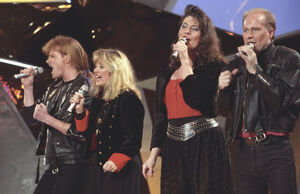 Just 4 Fun was a Norwegian band made up of Marianne Antonsen, Jan Groth, Eiríkur Hauksson and Hanne Krogh. They gained some fame in the early 1990s on the Norwegian concert circuit.

The group was the first act to go to Eurovision having not been selected in the Melodi Grand Prix national selection contest - all four members were selected internally. Both Hauksson and Krogh had previous Eurovision experience: the former as part of the Icelandic group ICY who made the debut for the nation in 1986, while the latter took part in 1971 as a soloist and in 1985 as part of the duo Bobbysocks!, which won the contest for Norway.

They represented Norway at the Eurovision Song Contest 1991 in Rome with the song Mrs. Thompson, finishing in 17th place despite high confidence from broadcaster NRK.

The group has since broken up, member Jan Groth passed away in 2014. Eiríkur Hauksson represented his native Iceland as a soloist at the 2007 contest in Helsinki.

Retrieved from "https://eurosong-contest.fandom.com/wiki/Just_4_Fun?oldid=34546"
Community content is available under CC-BY-SA unless otherwise noted.