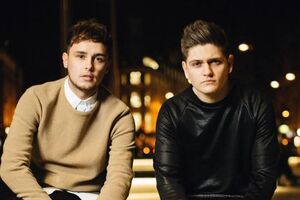 Joe and Jake are a British pop duo made up of Joe Woolford and Jake Shakeshaft. They got together after competing against each other on the fourth series of The Voice UK.

They represented the United Kingdom at the Eurovision Song Contest 2016 in Stockholm with the song You're Not Alone after winning Eurovision: You Decide, finishing in 24th place in the final.

In May 2018, Joe joined Jack Pack, a swing vocal group that participated in the 8th series of Britain's Got Talent.

Retrieved from "https://eurosong-contest.fandom.com/wiki/Joe_%26_Jake?oldid=35167"
Community content is available under CC-BY-SA unless otherwise noted.