The Nordic country of Iceland debuted in the 1986 contest with ICY. Up until its first of two relegations in 1998, the country placed rather consistently with Stjórnin coming in 4th in 1990. However, the year before, Daníel Ágúst Haraldsson scored Iceland their first last-place and the country's first Nul Points score.

Returning in 1999 after their relegation due to having a low average score, Selma Björnsdóttir placed second with her entry, All Out of Luck. This was Iceland's first top-three score, placing second to Sweden. In 2001, Two Tricky saw Iceland joint at the bottom of the scoreboard once again, leading to another relegation.

Since the introduction of the semi-finals in 2004, Iceland has qualified 9 times out of 16 appearances. They automatically qualified in 2004 after having placed inside the top 11 non-Big Four songs of 2003. In 2009, Yohanna gave the country its second runner-up placing with her song, Is It True? With 218 points, this was the country's best result in terms of points until 2021.

Between 2015 and 2018, Iceland failed to qualify - placing on the lower end of the semi-final results tables. One of the more shocking cases was at the Eurovision Song Contest 2016, when Greta Salóme's entry, Hear Them Calling, considered a favorite to win, ended up only placing 14th in the first semifinal. In 2019, they managed to qualify for the first time since 2014 with the song Hatrið mun sigra. In 2021, Daði & Gagnamagnið brought Iceland back to the top 5 for the first time since 2009

The 2020 film Eurovision Song Contest: The Story of Fire Saga is set in Iceland, and the movie's success inspired the town of Húsavík (the main setting of the story) to open a Eurovision museum.

Iceland is the only Nordic nation to have never won the contest so far. 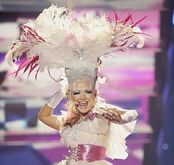 Daði & Gagnamagnið
Add a photo to this gallery

Retrieved from "https://eurosong-contest.fandom.com/wiki/Iceland?oldid=44918"
Community content is available under CC-BY-SA unless otherwise noted.