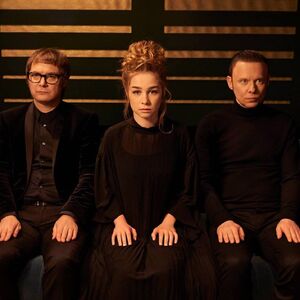 Hooverphonic are a Belgian trio from the Flemish region of the country. Formed in 1995, they are foremost a trip-hop group but have incorporated other genres such as alternative, indie pop and electronica into their sound.

They have released 10 studio albums to date, and since their formation have gone through many personnel changes. The current line-up is bassist/keyboardist Alex Callier, guitarist Raymond Geerts and singer Luka Cruysberghs.

On 1 October 2019, VRT announced that they would be representing Belgium at the Eurovision Song Contest 2020 in Rotterdam. Their song will be revealed at a later date.

Retrieved from "https://eurosong-contest.fandom.com/wiki/Hooverphonic?oldid=38851"
Community content is available under CC-BY-SA unless otherwise noted.