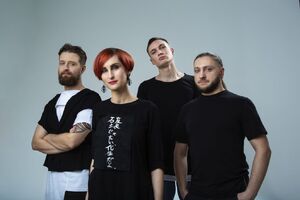 Go_A is a Ukrainian band formed in 2016 specializing in electro-folk music which combines traditional Ukrainian and modern sounds. The name of the group consists of "Go", as movement, and "A" as in the Greek letter Alpha, referring to going back to one's cultural roots.

The group gained popularity when their song "Vesnyanka" won The Best Track in Ukraine competition and took the first stage on a radio station in their country with "10Dance" for 6 consecutive weeks.

They have also performed at many music festivals as well as in Israel, Belarus and Poland.

With the cancellation of the 2020 contest, UA:PBC announced that Go_A would represent Ukraine at the Eurovision Song Contest 2021 with the song Shum. They finished in 5th place, Ukraine's best result since 2016.

Retrieved from "https://eurosong-contest.fandom.com/wiki/Go_A?oldid=45209"
Community content is available under CC-BY-SA unless otherwise noted.