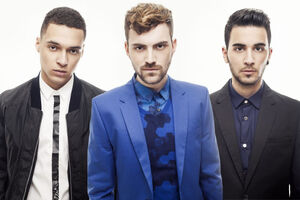 Rise Up (with RiskyKidd)

Freaky Fortune are a Greek dance music duo who, together with rapper RiskyKidd, represented Greece in the Eurovision Song Contest 2014 in Copenhagen with the song Rise Up, which successfully qualified for the final, where in finished in 20th place.

Their breakthrough in the internet community was a cover in Perez Hilton's cover competition. Their cover of Katy Perry's "Part of Me" was given a positive reception. After their win, they released three singles, having small local radio success.

The duo hasn't released any albums during their career, because of their minor success.

Retrieved from "https://eurosong-contest.fandom.com/wiki/Freaky_Fortune?oldid=18245"
Community content is available under CC-BY-SA unless otherwise noted.