Each country was to have awarded two sets of 12, 10, 8–1 points to their 10 favourite songs: one from their professional jury and the other from televoting

The Eurovision Song Contest 2020 was to have been staged at Rotterdam Ahoy in Rotterdam, Netherlands on 12, 14 and 16 May 2020. On 18 March 2020, the EBU announced that due to the ongoing coronavirus (COVID-19) pandemic and after exploring other alternative options, the event would be cancelled. This marked the first time the contest was ever cancelled in its over 60-year history.

A field of 10 interested cities were pared down to two - Rotterdam and Maastricht. The Hague (host in 1976 and 1980), Zwolle and Leeuwarden withdrew their bids due to their proposed venues being deemed unsuitable (The Hague later endorsed the Rotterdam bid), while Breda dropped out due to financial concerns. Amsterdam (host in 1970) withdrew due to unavailability for their proposed venues. Arnhem, 's-Hertogenbosch and Utrecht also applied.

On 4 December 2019, the presenting trio were revealed by NPO. They are Edsilia Rombley, Chantal Janzen and Jan Smit. Chantal and Jan were to have handled the main presenting duties, with Edsilia in the green room. 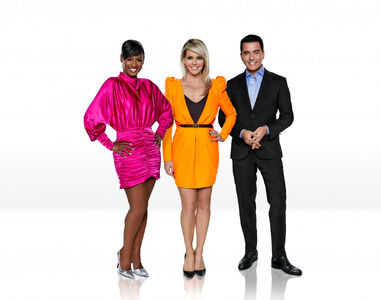 Add a photo to this gallery

Edsilia is best known for her participations at Eurovision in 1998 with Hemel en Aarde and in 2007 with On Top of the World. She has also co-hosted several editions of the popular Eurovision in Concert pre-party in Amsterdam. Chantal is a popular Dutch TV presenter and is a 5-time winner of the Golden Television Star award. Jan has been a member of the Dutch group De Toppers since late 2017 and is the Dutch co-commentator for Eurovision alongside Cornald Maas.

Aside from the main presenting trio, popular Dutch social media celebrity NikkieTutorials was planned to be hosting special online features for the 2020 contest.

In the 2020 host city reveal video, reigning Eurovision winner Duncan Laurence asked: "What's it really about?" This year's theme, Open Up, answers Duncan's question. It is an invitation to the world to Rotterdam to open themselves up to music and celebrate the things that make people unique.

“We have looked for a theme and slogan that reflect what the Netherlands stands for and which the Dutch can identify with; a country with an open mind to the world, where we speak our mind, with respect for each other. We also found it important to choose a theme that reflects the spirit of our times. People are concerned about increasing polarization and freedom isn’t as self-evident for everyone as it should be. With the slogan 'Open Up’, we warmly invite people to open up to others, to different opinions, each other's stories and of course to each other's music.”

“Open Up is the perfect slogan for the Eurovision Song Contest as it celebrates its 65th edition. In 1956, only 7 countries could watch the competition and since then we have opened up to the whole of Europe, to Australia and now, via streaming, to the whole world. The values of the Eurovision Song Contest are universality and inclusivity, and our proud tradition of celebrating diversity through music. Now we can add a new one – that of openness.”

The theme art, unveiled on 28 November 2019, tells a unique story of 65 years of the contest's history. Building on previous Dutch logo designs, it is an abstract representation of the flags of the 41 participating countries in the order of their first appearance. Five beams of blue light also radiate from the central circle, representing each of the Netherlands' five Eurovision victories.

Stage construction was due to start at Ahoy on 6 April. With restrictions on large social gatherings in the Netherlands until at least 1 June, it was decided that the venue would be turned into a temporary hospital for coronavirus patients.

The compilation album for the 2020 contest was re-branded as a tribute album to the 41 scheduled participants. Originally slated for an April release, it was officially pushed back to 15 May. The album debuted at #2 in the United Kingdom.

The EBU introduced the "Eurovision Home Concert" series. Each Friday episode featured past and present Eurovision artists performing live in their own homes. The week's featured artists performed 2 songs each: the entry they presented (or in the case of the 2020 participants, would present) at the contest, plus a song voted on by fans via Twitter and Instagram. 7 episodes aired on the Eurovision YouTube channel from 3 April to 15 May.

The EBU, along with several other broadcasters, started exploring ways to fill gaps in their schedules vacated by the cancellation of the contest. Australia, Austria, Germany, Sweden and the United Kingdom among other countries later announced their own special programming featuring an internal competition element.

The EBU later announced that in place of the grand final on 16 May, a special tribute show titled Europe Shine a Light would air to honor the 2020 participants in a non-competitive format as a show of spirit and unity. It was held at Stage 21 of Media Park in Hilversum and hosted by Edsilia Rombley, Chantal Janzen and Jan Smit, with NikkieTutorials hosting exclusive online content. 70 million viewers tuned in to watch the special.

On 12 and 14 May, which were to have been the two semifinals, the EBU aired the "Eurovision Song Celebration" on its YouTube channel. The semifinalists and the direct finalists had already been allocated into their respective semis and halves through the official allocation draw on 28 January, with the official running orders decided on by the 2020 contest's producers revealed during each episode. A "Fan Recap" was also added to each show, inviting Eurovision fans to dance to and celebrate their favorite 2020 entries.

From 28 March 2020, every Saturday featured "Eurovision Again", an interactive viewing party of past contests hosted by Eurovision fan Rob Holley. 15 minutes prior to the start of each live stream, the chosen year is revealed and fans are invited to vote for their favorite acts on Twitter during the show. The EBU has since gotten on board following the presentation of the 2006 contest, working with its members to unearth some of the classic contests such as 1974, 1988, 1991 and 1997 and airing them on the official Eurovision YouTube channel.

Contests prior to 2004 are still the property of their respective broadcasters, which meant they were only available on YouTube for one week following its initial showing.

Weekly Saturday showings ended on 27 June. As of 18 July, airings continued on the third Saturday of every month.

On 3 May 2020, digital content host NikkieTutorials launched "Eurovisioncalls", a miniseries on the official ESC YouTube channel. In each episode, Nikkie has a conversation with each of the 2020 participants in which fans can learn how each artist has been holding up since the cancellation, their inspirations, and musical plans for the future. Additionally, information about the artist's entry and performance plans are also discussed. Two to three episodes were featured each day.

Fan communities also held their own Eurovision 2020 contests and polls following the cancellation news. Among them was a full contest event organized by the forum community at ESCUnited which was held throughout the month of April. It was given the full contest experience, with official running orders and "live shows" for results as well as the forum's members acting as the national juries and vote spokespersons. It was won by Gjon's Tears representing Switzerland with Répondez-moi, winning both the jury and public vote over Bulgaria.

The Netherlands were to have voted in this semi. It would have taken place on 12 May 2020.

During the Eurovision Song Celebration episodes, the intended official running order was released as follows

United Kingdom were to have voted in this semi. It would have taken place on 14 May 2020.

The automatic finalists were as follows:

Retrieved from "https://eurosong-contest.fandom.com/wiki/Eurovision_Song_Contest_2020?oldid=44002"
Community content is available under CC-BY-SA unless otherwise noted.