Each country awards two sets of 12, 10, 8–1 points to their 10 favourite songs: one from their professional jury and the other from televoting

The Eurovision Song Contest 2019 was the 64th annual event and was held at Expo Tel Aviv, Pavilion 2 in Tel Aviv, Israel thanks to Netta Barzilai's win the previous year in Lisbon. The official dates were 14 and 16 May 2019 for the semifinals, with the grand final on 18 May 2019.

It was widely suspected that it would be a two-horse race between Jerusalem and Tel Aviv to become the host city. Eliat was also considered but dropped out of the race on 30 August 2018. This was the very first contest to be organized by Israel's new public broadcaster IPBC (KAN) since it began operations in mid-2017.

All of Israel's winners past and present were included in this edition in some capacity (Gali Atari, Dana International and Netta performing, with Izhar Cohen serving as the Israeli jury spokesperson for the final), as well as its first-ever participant Ilanit.

Duncan Laurence of the Netherlands was crowned the winner with the song Arcade, giving his country its 5th win overall and its first in 44 years. Rounding out the top 5 were Italy, Russia, Switzerland and Sweden.

Like the previous year, the 2019 contest featured a quartet of presenters and were revealed on 25 January 2019. They were model Bar Refaeli and Israeli TV personalities Erez Tal, Assi Azar and Lucy Ayoub.

Assi is well known for being one of the co-presenters of the Israeli selection series The Next Star for Eurovision, while Lucy was the Israeli spokesperson during the 2018 grand final.

The theme of the 2019 contest is Dare to Dream. The slogan itself focuses on unity, diversity and confidence. As Executive Supervisor Jon Ola Sand said about the theme:

The theme art, unveiled on 8 January 2019, consists of three triangles that, when they come together, form a glowing star. It is inspired by Florian Wieder's stage design for the event, and is a symbol of the stars of the future coming to Tel Aviv to chase their dreams.

The concept of the 2019 postcards is "Dancing Israel". Each participant is shown visiting a different location in Israel where they stop to touch a triangle on the screen. They are then invited to perform a style of dance with the people they meet.

A twist was announced for the revealing of the grand final voting results. The jury result and the counting and combining of televotes would take place the same way as the last three years, however, the televotes would then be awarded to countries according to their placement in the jury rankings. Meaning, the country placed last with the juries would receive their televote score first and so on with the country ranked first receiving their points last.

After the 2017 final, the Lord Mayor of Dublin said that Ireland should not participate in the 2019 contest due to the fact that it is being held in Israel (specifically in Jerusalem if it is chosen as the host city), also citing the "horrific ordeal of the Palestinian people needs to be highlighted." Ireland previously competed both times Israel hosted in 1979 and 1999. Additionally, the Left Party of Malmö in Sweden also called for the boycott of the event for the same reasons, saying Israel should be excluded from Eurovision "on humanitarian grounds." Iceland's participation was in jeopardy when a petition with over 22,000 signatures circulated in the hopes that the national broadcaster would not participate in the 2019 contest. All three countries since confirmed their participation.
A number of European and international members of the arts community including a few within the Eurovision circle signed a collective letter urging the EBU to pull hosting of the 2019 event from Israel - among them musician Roger Waters, who sent out pleas to Portuguese representative Conan Osíris and Australian representative Kate Miller-Heidke to "stand on the right side of history" and withdraw from the event. In response, Executive Supervisor Jon Ola Sand stated that the contest should not be used as a platform for political aims and expressed his support for the event's non-political nature.

Coinciding with these events, supporters of the BDS (Boycott, Divestment and Sanctions) movement converged on the contest's social media accounts such as Facebook and Twitter along with those of many of the participating artists and broadcasters, trying to coerce fans to boycott the contest (by either not watching the event on TV/internet or live in the venue) and artists to withdraw their participation due to escalating tensions in Gaza. Their actions also involved invading the stage during the second semifinal of the French selection and protesting outside the venues of the Spanish, German and Danish finals. Protests were also held outside the headquarters of several participating broadcasters including RTÉ in Ireland and the BBC in the United Kingdom. The BDS branch in Australia organized similar protests using the SBS logo in their promotional material. SBS later served BDS Australia with a cease and desist order for unauthorized use of their branding for the movement's purposes.

Following death threats sent to Bilal Hassani and Chimène Badi by the BDS movement during the French national selection, the EBU, according to Israel's Channel 2, sent letters to all participating countries outlining measures to ensure artists' and delegations' safety and security during the contest. Additionally, KAN is expected to ask for assistance with security costs from the Israeli government, which was later granted.

Ukraine was to have been represented by the artist MARUV with the song Siren Song. However, following the Ukrainian national final, the Ukrainian broadcaster gave Maruv an ultimatum regarding upcoming performances in Russia. Later, Maruv refused to give into a list of demands in the contract drafted by UA:PBC which included stiff financial penalties for any broken rule and having to pay her own way to Tel Aviv. On 25 February 2019, she withdrew as the Ukrainian representative. UA:PBC then looked to Freedom Jazz and Kazka (who placed second and third) as a possible replacement, but both acts declined the offer. Fourth-place act Brunettes Shoot Blondes stated that they would have also rejected the invitation if they were asked.

On 27 February 2019, UA:PBC announced that Ukraine would withdraw from the 2019 contest, but would still broadcast the event.

Eurovoix.com reported that members of the Belarusian jury revealed hints about the way they voted during the first semifinal jury show. Under the rules set for national juries by the EBU regarding confidentiality and impartiality, all five jurors were dismissed and barred from voting in the grand final, with the country's jury scores were based on an "aggregate result" made up of the combined averages of the entire allocation pot Belarus was assigned to.

On 22 May 2019, the EBU released a statement that an error had been made in the Belarusian aggregate jury results. It was revealed that the aggregate points were awarded to the bottom 10 countries in the live final instead of the top 10. Had the error not been made, Malta would have received Belarus' 12 points instead of Israel, leaving the latter with "nul points" from the juries.

The points were corrected in the days following the contest, adding or subtracting points and countries switching places up or down on the scoreboard. This meant that North Macedonia was the official jury winner of the grand final instead of Sweden.

As Hatari was receiving their televote score during the final, they displayed Palestinian flag scarves on camera, which violates the rule of political statements and elicited boos from the audience along with shock from those watching in the press center. The scarves were confiscated by members of security and the event staff, and as a result RÚV was eventually fined €5000 by the EBU. The reaction shot was replaced with the 2019 star logo and an Icelandic flag on the official contest DVD.

During a watch party of the 2019 contest on YouTube on 15 May 2021, the incident was replaced with a backdrop shot and a quick cut to the French televote result.

The semi-final allocation draw was held on 28 January 2019 at Tel Aviv Museum of Art, and hosted by Assi Azar and Lucy Ayoub. The insignia handover ceremony took place before the draw began, officially beginning the countdown to the contest.

The pots were as follows, calculated by the EBU's voting providers Digame and based on voting patterns over the past 14 years: 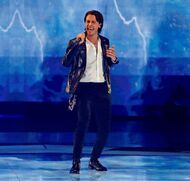 Serhat
Add a photo to this gallery

Chingiz
Add a photo to this gallery

All countries voted. The final took on 18 May 2019. Israel's place in the running order was decided during the Head of Delegations meetings in March 2019.

Miki Núñez
Add a photo to this gallery

Retrieved from "https://eurosong-contest.fandom.com/wiki/Eurovision_Song_Contest_2019?oldid=44604"
Community content is available under CC-BY-SA unless otherwise noted.