Jury: Each country gives 1-8, 10 and 12 points to their favorite songs excluding their own

Televote: Each country gives 1-8, 10 and 12 points to their favorite songs excluding their own. All votes are then combined with distribution of points from lowest total to highest total and added on to the jury points

The Eurovision Song Contest 2016 was the 61st of its kind and was held at the Ericsson Globe Arena in Stockholm, Sweden thanks to Måns Zelmerlöw's win the previous year in Vienna. The preliminary dates were determined at the 2015 Head of Delegations meeting to be on the 10th, 12th and 14 May 2016 - the same as that of the 2011 contest in Germany. These dates were made official with the announcement of the host city on 8 July 2015.

42 nations took part in Stockholm. Returning to the contest this year was Ukraine, who sat out 2015 due to financial problems. Australia also returned to the Contest, despite Jon Ola Sand stating that they wouldn't return if they didn't win,[1] however, the country passed through the semifinal stage. Bosnia and Herzegovina returned after their last participation in 2012, BHRT was able to secure the funds needed to participate. Both Bulgaria and Croatia made their returns as well, their last participations being in 2013. Portugal decided to withdraw, and Romania was forced to withdraw three weeks before the contest due to unpaid debts.

Two smaller venues in the Globe complex acted as supplementary areas: the Annexet housed the delegations and the Hovet acted as the main press centre.

The contest was won by Ukraine with the song 1944 by Jamala, which broke the scoring record set by Alexander Rybak in 2009 and won despite only being second in both halves of the split vote system. Rounding out the top 3 was jury winner Australia and televote winner Russia, it was the second consecutive year that the jury and the televote did not agree on the winner.

The Czech Republic qualified for the first time since its 2007 debut, while Greece's and Bosnia & Herzegovina's 100% qualification streaks were snapped and none of the Nordic countries in the semifinals advanced. Among the Big 5, France finished the highest in 6th place, their best result in 14 years and first top 10 since 2009. 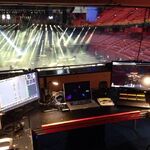 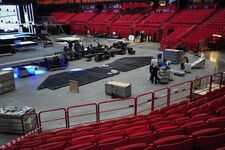 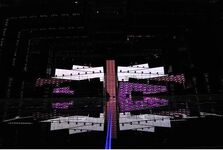 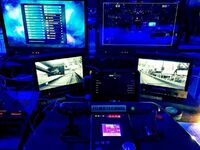 Computers controlling the scoreboard
Add a photo to this gallery

After much speculations, it was revealed on 14 December 2015 that 2013 presenter Petra Mede and defending Eurovision winner Måns Zelmerlöw would be the 2016 presenters. Both had been the heavy favorites for the job, and Zelmerlöw becomes the 4th former contestant to present the show the year directly following his win, joining Toto Cutugno, Marie N and Eldar Gasimov in that select group.

Petra Mede joins Katie Boyle and Jacqueline Joubert as the only people to present the contest more than once.

This year's theme is Come Together. The event's executive producer, Martin Österdahl, explains the meaning like this: "The Eurovision Song Contest is never about borders, politics or ideologies. It is about reaching across all the boundaries that separates us human beings from each other".

The two Semi-Finals and the Grand Final will be broadcasted with international sign performances, and three interpreters will translate Måns Zelmerlöw and Petra Mede live from a studio at SVT. Nine sign-language performers from Lithuania, Germany, Iceland, Russia and Denmark will perform all participating songs in international sing language.[3]

"I want to give the message behind the song, so that hearing impaired people can also be a part of the show. The Eurovision Song Contest will be my debut as sign performer and I’ve found my talent" - Laith Fathulla, sign performer for the 2016 Contest

Produced by the Camp David production team, the postcards this year detailed a day in the personal and professional life of each artist in their home country.

Full video with explanation here.
From 2016, there will be a new voting format. The professional juries and televoters from each country will each award a separate set of points from 1 to 8, 10 and 12. The procedure will go ahead as normal, with the spokespersons announcing the jury votes. The televotes will be counted and combined and announced by the hosts at the end of the show with the country with the fewest televotes being announced first, leading up to the eventual winner.

This will create more excitement for the viewers and will likely decrease the odds of songs finishing with Nul Points.

On 13 February 2016 the band Stadio was crowned winner of Festival di Sanremo. At the final press conference, they declined the invite to represent Italy in Stockholm due to a tour that they prepared before. So RAI was forced to choose Francesca Michielin, who was second at the Festival.

The block was eventually lifted for some non-European countries such as Canada in 2021.

The semi-final allocation draw was held on 25 January 2016 at Stockholm City Hall, and hosted by Alexandra Pascalidou and Jovan Radomir. The insignia handover ceremony took place before the draw began, officially beginning the countdown to the contest.

On 23 September 2015, SVT announced that the six pre-qualified countries (host country Sweden and the Big Five) would perform in the semifinal they are allocated to vote in while still keeping their status as finalists. The performances will consist of footage recorded during their respective voting semi's second dress rehearsal instead of the use of clips from their preview videos.

The pots are as follows, calculated by the EBU's voting providers Digame and based on voting patterns over the past 10 years:

Ira Losco
Add a photo to this gallery

Laura Tesoro
Add a photo to this gallery

All countries voted. The final took place on 14 May 2016. Sweden's place in the running order was decided during the Head of Delegations meetings in March 2016, and it was decided that Sweden would perform 9th on the night. The Big 5 drew their half allocations during the opening ceremony on 8 May 2016.

Iveta Mukuchyan
Add a photo to this gallery

Retrieved from "https://eurosong-contest.fandom.com/wiki/Eurovision_Song_Contest_2016?oldid=44602"
Community content is available under CC-BY-SA unless otherwise noted.