The contest was won by Loreen from Sweden with the song Euphoria which was written by Thomas G:son and Peter Boström. Euphoria earned a total of 372 points, placing it in the top spot. Russia finished in second place, with Serbia finishing in third. They were followed by the host country, Azerbaijan, which reached the 4th place. Albania achieved its first top 5 placing and finished 5th, which was their best result to date. Germany, Italy and Spain were the three members of the Big Five that managed to rank within the top 10, finishing in 8th, 9th and 10th places respectively.

The theme for the 2012 Contest was "Light Your Fire!"[2]This matches Azerbaijan's nickname - "Land of Fire."

The Pre-Song Postcards reflected many aspects of Azerbaijan and Baku and acted as a tourism mechanism to present the country and the city to the world. Some postcards focused on Azerbaijan, while others focused on Baku with a shot of a famous landmark or landscape. The postcards then cut to a shot of the Crystal Hall lit up in the colours of the performing country. 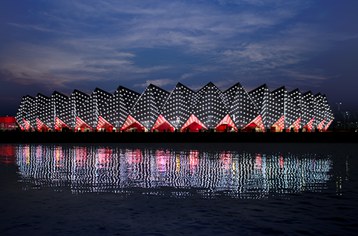 Baku is the capital and largest city of Azerbaijan, as well as the largest city on the Caspian Sea and of the Caucasus region. It is located on the southern shore of the Absheron Peninsula, which projects into the Caspian Sea. The city consists of two principal parts: the downtown and the old Inner City. Baku's urban population at the beginning of 2009 was estimated at just over two million people.

The semi-final allocation draw was held on 25 January 2012 at the Buta Palace. The insignia handover ceremony took place before the draw began, officially beginning the countdown to the contest.

The pots were as follows, calculated by the EBU's voting providers Digame and based on historical voting patterns[3]:

Spain voted in this semi-final. The EBU allowed RTSH, the Albanian broadcaster to not broadcast this semi final due to a bus accident. This meant Albania used a full jury vote instead of the televote.

Jedward
Add a photo to this gallery

Germany voted in this semi-final. Germany requested that the country vote in this semi final. Armenia was supposed to participate in this semi, but then withdrew for security reasons.

Donny Montell
Add a photo to this gallery

Pasha Parfeny
Add a photo to this gallery

Retrieved from "https://eurosong-contest.fandom.com/wiki/Eurovision_Song_Contest_2012?oldid=38432"
Community content is available under CC-BY-SA unless otherwise noted.