The Eurovision Song Contest 2006 was the 51st edition held in Athens, Greece at the OAKA Olympic Arena and was presented by Greek-born American TV personality Maria Menounos and 2004 Eurovision participant Sakis Rouvas. The semi-final was held on 18 May 2006 and the final on 20 May 2006.

A new system was adopted this year regarding the presentation of each country's votes. Instead of having the individual spokesperson read out every point as done in the past, the scores from 1-7 were shown on screen first, followed by the spokesperson only reading out the top 3 scores of 8, 10 and 12 points. This new system helped shave approximately 40 minutes off the show's running time and has been used ever since.

The contest was won by Finland, considered to be the "underachievers" of Eurovision, with the song Hard Rock Hallelujah performed by the group Lordi. It is the first hard rock song to ever win the contest, winning both the semi and the final with the same amount of points. Finland waited a full 45 years for their first victory, eclipsing the previous mark of 31 years set by Greece the year before. That record has since been eclipsed by Portugal with their victory in 2017 ending a 53-year drought.

The logo of the 2006 Contest was created by the design company Karamela, and it was based on the Phaistos Disc - a symbol of ancient Greece. According to ERT, it was "inspired by the wind and the sea, the golden sunlight and the glow of the sand".

The Pre-Song Postcards showed places connected to Greece's history as well as its modern tourism hotspots. . 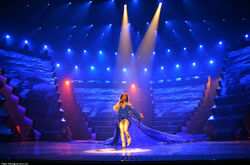 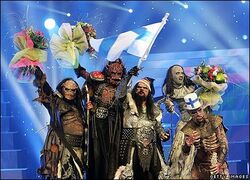 Construction of the stage
Add a photo to this gallery

37 countries participated, Armenia making its debut with Austria and Hungary withdrawing. Serbia and Montenegro also withdrew due to the country splitting up into two independent nations. Ireland's entry was the 1,000th song performed at the contest.

All countries voted including Serbia and Montenegro. The final took place on 20 May 2006. Lordi won for Finland with the song Hard Rock Hallelujah.

Retrieved from "https://eurosong-contest.fandom.com/wiki/Eurovision_Song_Contest_2006?oldid=44068"
Community content is available under CC-BY-SA unless otherwise noted.