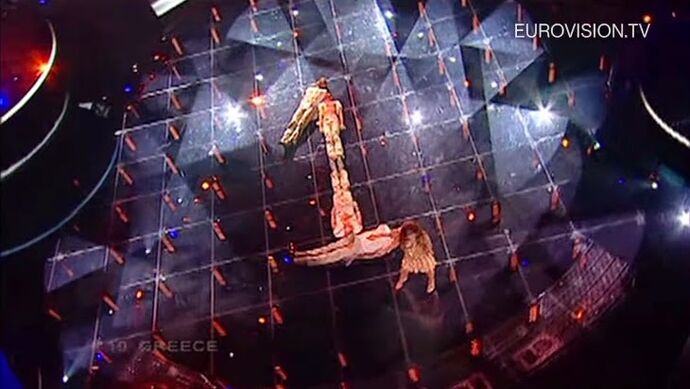 Eurovision Song Contest 2005
Helena Paparizou was Europe's Number One when she brought Greece to the top of the scoreboard for the first time.

Ruslana performing a medley of Wild Dances and "Heart on Fire"

Greece
Helena Paparizou - "My Number One"

The Eurovision Song Contest 2005 was the 50th Eurovision Song Contest, which was held at the Palace of Sports, Kiev, Ukraine. The winner was Greece's My Number One, written by the famous songwriters Christos Dantis and Natalia Germanos and performed by Greek-Swedish singer Helena Paparizou, who scored 230 points, while Malta's Angel, Chiara, was the runner up with 192 points, and the third place went to Romania's Let Me Try.

Moldova and Bulgaria made their debuts, while Hungary returned to the contest for the first time since 1998.

The contest took place on 19 May 2005 for the semi-final and 21 May 2005 for the final. Organizers hoped that this event would boost Ukraine's image abroad and increase tourism, while the country's new government hoped that it would also give a modest boost to the long-term goal of acquiring European Union membership.

In the same year, the Congratulations: 50 Years show was hosted, by Katrina Leskanich and Renars Kaupers of Brainstorm, in Forum Arena, in Copenhagen, Denmark, to celebrate the 50th show.

The stage being constructed in Kiev.

The crowd outside the arena

Helena Paparizou with the Grand Prix trophy.
Add a photo to this gallery

All countries, including the Big Four, voted in the Semi Final that was held on 19 May 2005. Only the top ten qualified to the final out of 25 participants.

Retrieved from "https://eurosong-contest.fandom.com/wiki/Eurovision_Song_Contest_2005?oldid=44138"
Community content is available under CC-BY-SA unless otherwise noted.