Under The Same Sky

Switzerland (in the semifinal)
Piero & The MusicStars - Celebrate

The Eurovision Song Contest 2004 was the 49th edition of the contest, held in Istanbul, Turkey at the Abdi İpekçi Arena and was hosted by Meltem Cumbul and Korhan Abay.  The 2004 contest introduced the new generic logo for the competition which would feature the host country's flag in the stylized center heart that formed the "V" in "Eurovision".

The theme of the 2004 contest is "Under The Same Sky", which reflects Istanbul being a city that straddles two continents, as well as bringing the artists together to celebrate music.

As new countries expressed their desire to join the contest (Albania, Andorra, Belarus and Serbia-Montenegro all made their debut this year), this year's edition introduced the semi-final round to accommodate the growing demand, thereby scrapping the relegation rule.  The ten highest scores from the semi-final would advance to the final joining 14 other pre-qualified countries (the Big Four and the top 10 from the 2003 contest outside the Big Four).  Denmark, Finland, Lithuania, Macedonia and Switzerland returned from relegation, while Monaco returned after a 25-year-long hiatus from the contest.

Ukraine won on only its second entry. The winning song was Wild Dances performed by Ukrainian superstar Ruslana. She had been on an extensive promotional tour in lots of European countries before the contest, which could have contributed to her victory. The pre-qualified countries in the Final didn't do significantly well: Nine of these entries ended up bottom-10 and only Turkey, Sweden, Germany and Spain made it into the top-10.

After a few countries had given their votes, it was clear that competition would be a three horse race between Ukraine, Serbia & Montenegro and Greece.

The final was not just shown in the participating countries, but also in Armenia, Kosovo, Puerto Rico, and Australia. For the first time, a DVD was released shortly after the event including both the Semi-Final and the Final.[1] 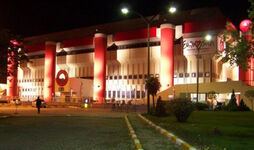 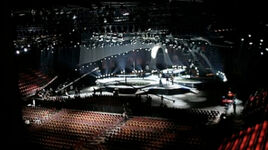 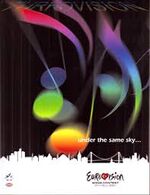 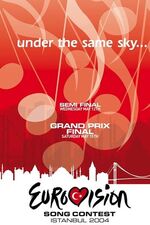 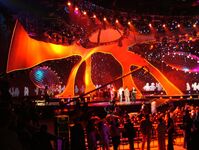 Inside the "fan circle"

All participants of the contest broadcast and voted in the semi final, except for France, Poland and Russia, who all automatically qualified to the final. The following year, the EBU made it mandatory for all countries to broadcast the semi final.

Countries highlighted in gold/silver/peach qualified to the final.

Countries highlighted in gold/silver/peach automatically qualified to the 2005 final. 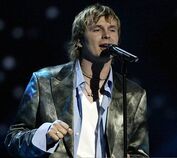 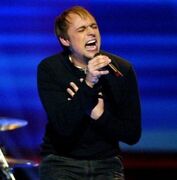