Each country awards 1–8, 10, and 12 points to their ten favourite songs

Turkey
Sertab Erener - Everyway That I Can

Turkey got their first (and so far, only) win with the song Everyway That I Can by Sertab Erener, with Belgium finishing second and Russia third in one of the tightest races for the title since 1991 - only three points separating first from third. The United Kingdom suffered their most embarrassing finish ever, finishing in last place with the dreaded Nul Points.

A record number of twenty-six countries participated, which saw the return of Iceland, Ireland, Netherlands, Norway, and Poland after having been relegated from competing the previous year, Portugal returning to the contest after withdrawing the previous year, while Ukraine participated in the contest for the first time. Denmark, Finland, Lithuania, Macedonia, and Switzerland were required to withdraw due to their poor results in the 2002 contest.

Due to the increase of prospective countries, this would mark the last edition which took place in one evening. Following the contest, discussions about how to accommodate them led to the introduction of the semifinal the following year.

It was the first time that Latvia hosted the contest, having debuted in 2000. Three cities were considered as the host city of the contest: Riga, Ventspils, and Jūrmala. LTV chose the Skonto Hall as the venue after conducting a lengthy bidding process. The official sponsors for the contest were telecom company Latvijas Mobilais Telefons and Latvian bank Parex Banka.

The hosts for the contest were the previous year's winner Marie N and former Latvian representative at the 2000 contest, Renārs Kaupers, who competed in the contest as part of the band Brainstorm.

The design of the contest was built around the theme "Magical Rendez-vous", which represented the meeting of the various European nations coming to Latvia and encountering Latvia's versatile landscapes.

LTV launched a competition in order to find the logo for the contest. Due to high interest, there were 204 submissions. The logo, named "Upes" (Latvian for "rivers") was revealed on 16 November 2002, and carried the slogan "All rivers flow toward the sea, all songs flow toward the Eurovision Song Contest".[1]

T.A.T.u. caused all sorts of issues around the time of the contest, boasting that they would "win without a doubt" and criticizing Lou, the German entrant, by calling her a "witch" with Julia Volkova stating "In Russia we nurse blind and old people, but we don't send them to the Grand Prix. This must be different in Germany."[2]

The Executive Supervisor at the time, Sarah Yuen, called them the "bad girls of pop" after turning up to rehearse a day late, with the reason that Volkova had a sore throat.[3] The EBU had also prepared a pre-recorded piece of rehearsal footage in case the duo performed an inappropriate stunt on stage. This never had to be done.[4]

The Russian broadcaster complained that the use of the Irish back-up jury cost them victory, citing the small gap between the Russian and Turkish scores. However, the EBU cleared the Irish broadcaster of wrongdoing since the televotes were delayed and the jury did not break any rules. If the televote had gone ahead as planned, Turkey still would've won, but Russia would've placed 2nd over Belgium by 7 points, while the United Kingdom would still have 0 points. [5]

The reality of the United Kingdom receiving nul points caused a stir in British media, with the late Terry Wogan calling it "post-Iraq backlash". 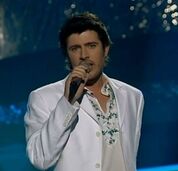 Karmen
Add a photo to this gallery

In 2003, it became compulsory to use televoting again, unless it was not possible for the whole country to vote. Russia and Bosnia & Herzegovina used a jury instead, as well as Ireland, due to a delay in receiving the televoting results.

Retrieved from "https://eurosong-contest.fandom.com/wiki/Eurovision_Song_Contest_2003?oldid=44133"
Community content is available under CC-BY-SA unless otherwise noted.