The Olsen Brothers opened the show with a snippet from their winning song Fly on the Wings of Love, followed by their latest single "Walk Right Back". The presenters were Danish journalist and TV-show presenter Natasja Crone Back and the famous Danish actor Søren Pilmark who spoke most of their announcements in rhyme. BBC commentator Terry Wogan caused quite a stir among the Danish people when he referred to the hosts at one point as "the Tooth Fairy and Doctor Death". 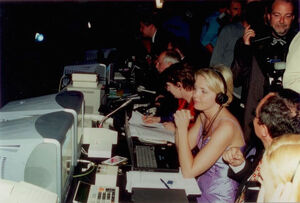 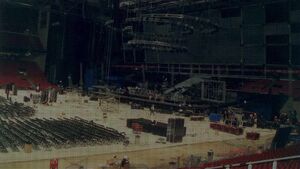 Building the stage
Add a photo to this gallery

Countries relegated/withdrawn in 2002 are highlighted in pink/red. After Portugal withdrew in 2002, their place was awarded to 18th-place Latvia (The Netherlands lost a tiebreaker with the latter).

Rollo & King
Add a photo to this gallery
Retrieved from "https://eurosong-contest.fandom.com/wiki/Eurovision_Song_Contest_2001?oldid=42794"
Community content is available under CC-BY-SA unless otherwise noted.