Jupiter, The Bringer of Joviality

The Eurovision Song Contest 1998 was the 43rd Eurovision Song Contest and was held on 9 May 1998 at the National Indoor Arena in Birmingham, United Kingdom, following Katrina and The Waves' victory in 1997. The presenters were Terry Wogan, the usual UK commentator at the time and Ulrika Jonsson, a Swedish-born ex-weather woman. Despite being one of the presenters, Terry Wogan still managed to provide his trademark comedy commentary to the contest for the BBC. 1998 was also the year where the three chevrons of the EBU logo had to be included in the actual contest logo of the year. This also happened in 1999, but before 1998 in 1994, the colors of the chevrons had to be included.

The chevrons feature on the 2000 - 2003 Eurovision Song Contest CD albums. 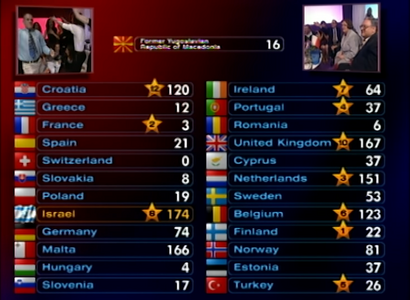 For the second year in a row, at least one country went home without points; Switzerland's Gunvor Guggisberg with her composition Lass' ihn failed to score a single point. Other notable participants were Germany's Guildo Horn, whose shocking comedic act resulted in his climbing the scaffold on the side of the stage. Controversially chosen to represent Germany, he was criticized for his lack of seriousness by the German press.

However, after winning by 60% of the vote, the German people were firmly on Horn's side. "Guildo-Fever" spread throughout Germany during the weeks leading up to the contest, with Horn becoming front-page material in Germany. He was also noticed in countries around Europe, and the early criticism that had existed in Germany arose in those countries.

Even though his 7th place was disappointing, to some Germans it was a revival for the contest in Germany, and was the beginning of 4 consecutive top-ten finishes. Greece earned only 12 points, all of which came from Cyprus. After the contest, there was a correction made with the Spanish votes, who mistakenly awarded Germany zero points, rather than the 12 that were rightfully theirs.

In a BBC interview, future Eurovision 2000 entrant Nicki French said that one of her most memorable Eurovision moments was Ulrika's faux pas during the voting. The Dutch lady announcing the Netherlands' votes had previously been a contestant in Eurovision, and to that, Ulrika replied, "A long time ago, was it?" which was followed by much laughter from the audience. In fact Conny Vandenbos who sang for her country in 1965 said that she had gone to the contest many years ago; unfortunately for both Conny and Ulrika this wasn't heard above the noise of the audience. What was heard, however, was Ulrika's seemingly insulting comment.

Despite FYR Macedonia "debuting" at the 1996 contest's Pre Qualifying round, this was the first proper Eurovision final they have participated in.