Katrina and The Waves - Love Shine a Light

The Eurovision Song Contest 1997 was the 42nd of the long running light entertainment show, and it was held at the Point Theatre Dublin, Ireland, on 3 May 1997. Carrie Crowley and Boyzone member Ronan Keating were the presenters of the show.

American-led group Katrina and The Waves, representing the United Kingdom, were the winners of the contest with the song Love Shine a Light, written by that band's lead guitarist Kimberley Rew (whom didn't appear on stage), and Marc Roberts representing the host country came second with Mysterious Woman. Despite being the runner-up, it remarkably received only one 12-point score, which came from the United Kingdom.

The UK spokesman Colin Berry remarked: "You're going to like this one: Ireland, twelve points!" causing Terry Wogan to reply: "Well, tit for tat!" The winning song scored an unprecedented 227 points; it received points from all participating countries, including five sets of 10 points and a record-breaking ten sets of the maximum 12 points. Love Shine a Light is still regarded as one of the most successful Eurovision winners, and was the closing song in the medley that opened the 50th anniversary show Congratulations in Copenhagen in 2005, and the Eurovision 2006 semi-final in Athens. With this victory, the United Kingdom has five Eurovision wins and it is, to date, the country's last win in the Contest.

After the controversy over the pre-qualifier in 1996, the EBU introduced a new system for 1997: countries with the lowest average scores over the previous four years would be relegated from the 1997 contest, and those with the lowest averages over the previous five years would be excluded from future contests (save that every country so excluded for one year would automatically be allowed to participate the following year), with so many countries being omitted as would reduce the number of participants each year to 25.

Televoting was also tested in 5 countries (Austria, Switzerland, Germany, Sweden and United Kingdom) with the remaining 20 continuing to use the juries.

Israel declined to participate, as the Contest was held on its Holocaust Remembrance Day, granting a reprieve to Bosnia and Herzegovina, which would otherwise have been excluded owing to its low point average over the previous four years.  It would also be Italy's last appearance until its return in 2011.

1997 also brought the first year of the fan page Eurovisionhouse.nl's Barbara Dex Award, which was awarded to the Maltese entrant Debbie Scerri. 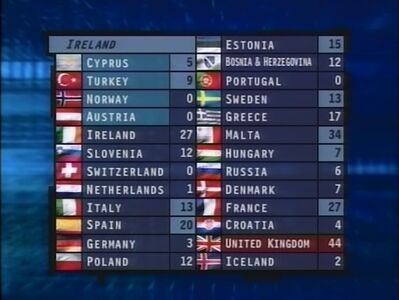 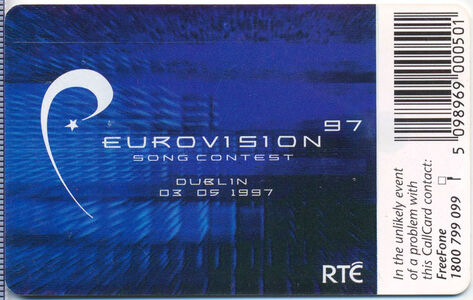 A callcard issued by RTE to celebrate Eurovision 1997 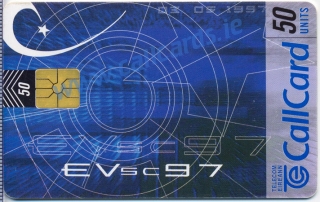 Katrina and the Waves

Paul Oscar
Add a photo to this gallery

Retrieved from "https://eurosong-contest.fandom.com/wiki/Eurovision_Song_Contest_1997?oldid=42003"
Community content is available under CC-BY-SA unless otherwise noted.