A Century Of Dance

Linda Martin - Why Me?

The Eurovision Song Contest 1992 was the 37th annual contest held 9 May 1992 in Malmö, Sweden and hosted by Lydia Capolicchio and Harald Treutiger.  This marked the first time Malmö would host the contest, they would do so again in 2013.  It was also the last time Yugoslavia would compete as a full member with their regions forming independent countries, as well as the last contest to have direct qualification for all nations.

The inter-song postcards took the form of a scrapbook, in which an animated character known as Eurobird (the 1992 contest's mascot) turned each page to reveal the participating country's flag as well as song information and a video featuring the artist.

After 15 years and 16 contests, Executive Supervisor Frank Naef announced that the 1992 contest would be his last. Before the voting started, he was given a send-off by Carola and massive applause from the audience.

The winner was Linda Martin for Ireland with the song Why Me?, which was written by Johnny Logan, making him the only person to win Eurovision singing someone else's song, singing his own song, and writing a song for another artist.

Christer Björkman, who represented the host country, would go on to become a figurehead in the Eurovision community, most notably as the Swedish head of delegation, producer of the 2013 and 2016 contests, and head of Melodifestivalen. 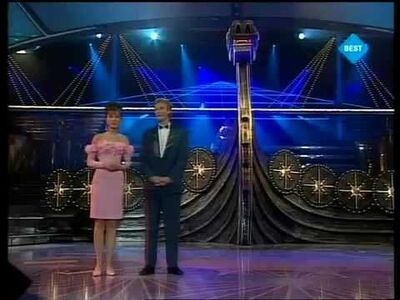 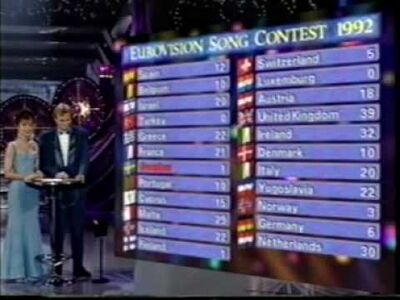 The hosts with the scoreboard 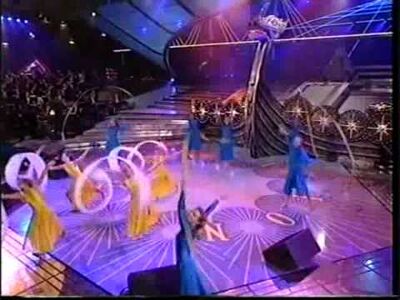 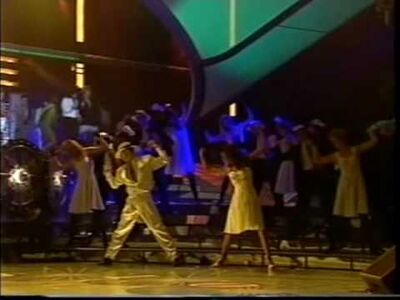 Interval act
Add a photo to this gallery

Retrieved from "https://eurosong-contest.fandom.com/wiki/Eurovision_Song_Contest_1992?oldid=41811"
Community content is available under CC-BY-SA unless otherwise noted.