The Eurovision Song Contest 1991 was the 36th edition held on 4 May 1991. San Remo, where the concept of the contest was born, was to be the intended host city, but due to the mounting tensions of the Gulf War, it was moved to the Cinecittà movie studios in Rome which was perceived to be more secure. It was co-hosted by Italy's two previous Eurovision winners Gigliola Cinquetti and Toto Cutugno, the latter having won in Zagreb the previous year. The Netherlands had withdrawn due to the observance of a national holiday, but Malta was making its return after a long absence.

The inter-song postcards were cleverly done: each artist was asked to sing a well-known Italian song as famous Italian landmarks that best represented their individual personalities were superimposed in the background.

At the conclusion of voting, Sweden and Amina Annabi of France were tied with 146 points each, the second tie since the infamous four-way of 1969. Starting the count-back procedure, both had 4 sets of 12-point scores, but when it came to the 10-point scores the advantage swung towards Sweden, who had 5 sets of 10s compared to 2 sets for France (under the current tiebreaker rules, France would have won due to one more country voting for it - 18 nations compared to 17 for Sweden).

This count-back gave Sweden its third victory with the song Fångad av en stormvind performed by Carola. On the other hand, a bit further down the scoreboard, Thomas Forstner of Austria had Nul Points with the song Venedig im Regen, only 2 years after he finished in the top 5 in Lausanne. 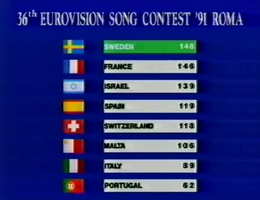 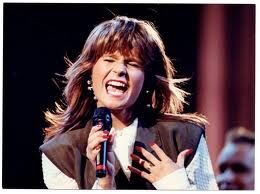 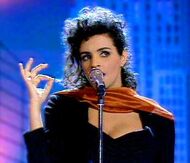 Many incidents, both logistical and technical, plagued this edition. Due to the last-minute move to Rome, the stage sets were hastily put together, and heavy rain during the week delayed the orchestra and many of the delegations for their scheduled rehearsals.

The Greek entry's performance was hampered by the orchestra's saxophone player, the Luxembourg entry was interrupted by a broken guitar string, and during the Swedish performance, the sound failed inside the venue (however, the juries and the television audience could hear everything perfectly).

Additionally, hosts Cinquetti and Cutugno had very little to no grasp of the EBU's official languages of English and French, choosing to do the majority of their presenting duties in Italian.