The Eurovision Song Contest 1983 was the 28th edition held on 23 April 1983 at the Rudi Sedlmayer-Halle in Munich and hosted by Marlene Charell due to Nicole's win the previous year in Harrogate. 20 nations competed in this contest: France was back after its second channel Antenne 2 (now known as France 2) took over broadcasting the competition when TF1 withdrew, and Italy and Greece also returned after a time away. Noticeably absent this time was Ireland, who did not participate due to strike action at their main channel RTE. The 1983 contest was also the first time it was broadcast in Australia and has gained a huge fan following ever since.

Several hit songs came out of this contest: Ofra Haza's second-place song was a massive European hit, as was Danijel's song for Yugoslavia and Carola's song for Sweden. For the latter, it was the first of her three Eurovision appearances.

The contest was won by Corinne Hermès for Luxembourg with the song Si la vie est cadeau. It gave Luxembourg an outright fifth win, a feat later matched by the United Kingdom in 1997 and The Netherlands in 2019, and eventually beaten by Ireland in 1994 and Sweden in 2015. 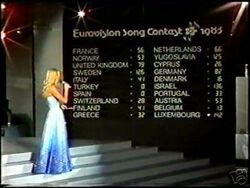