Film of sights and sounds around Jerusalem

The Eurovision Song Contest 1979 was the 24th edition held on 31 March 1979 at the Binyanei Ha'ouma in Jerusalem, Israel due to Izhar Cohen & Alpha Beta's win in Paris the previous year.  It was presented by Yardena Arazi (who became the second former contestant to act as host) and Daniel Pe'er.

This was the first contest to be staged outside of Europe. As well as transmitting to the 19 participating nations, the show was also broadcast in Romania, Iceland and Hong Kong.

Israel won for the second consecutive year with the song Hallelujah performed by Gali Atari and Milk and Honey, successfully defending their title on home ground. Down by 1 point to Spain going into the final round of voting, it was the Spanish jury that caused their own defeat by giving 10 points to the Israeli entry. 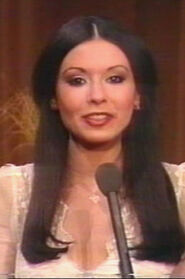 Yardena Arazi, one of two hosts for the evening

Daniel Pe'er, the second host for the evening
Add a photo to this gallery

Retrieved from "https://eurosong-contest.fandom.com/wiki/Eurovision_Song_Contest_1979?oldid=36745"
Community content is available under CC-BY-SA unless otherwise noted.