Each country had two jury members, one aged between 16 and 25 and aged between 26 and 55. They each awarded 1 to 5 points for each song.

The voting was a very close one, with Spain finishing only 4 points behind and Cliff Richard of the United Kingdom (who came second in 1968) another 2 points after. Even last-place Belgium had at least 50 points, which is a rare thing!

According to The Eurovision Song Contest: The Official History by John Kennedy O'Connor, the winning song by Anne Marie David, scored the highest score ever achieved in Eurovision under any voting format, recording 129 points out of a possible 160; scoring just under 81% of the possible maximum, but partly due to a scoring system which guaranteed all countries at least two points from each other country.

The senior Swiss juror was highly remembered for the "flamboyant" way he presented his votes, and this voting system was eventually retired along with jurors being shown on camera. The 1973 contest is also the second time that Finnish participant Marion Rung performed first on the night, having performed first in 1962 with Tipi-tii.

With the atrocity of the 1972 Munich Massacre, the venue was placed under a high level of security to allow Israel, who was making its debut, to participate comfortably, and audience members and commentators, (as stated by Terry Wogan from the BBC in 2005) were warned not to get out of their seats during the show, at the risk of being shot by security personnel. 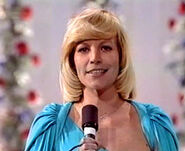 Helga Guitton, the host for the evening
Add a photo to this gallery

Retrieved from "https://eurosong-contest.fandom.com/wiki/Eurovision_Song_Contest_1973?oldid=32278"
Community content is available under CC-BY-SA unless otherwise noted.