Each country had 10 jury members who each cast one vote for their favourite song.

Sandie Shaw - Puppet on a String

The Eurovision Song Contest 1967 was the 12th Eurovision Song Contest, in the 60 years of its existence. It took place in Vienna, Austria on 8 April 1967. The host that evening was Erica Vaal, and this was the first time that Austria would hold the contest, the second time being in 2015, after Conchita Wurst's win in Copenhagen. However, in 1966, Udo Jürgens won for Austria.

The United Kingdom won for the first time with Sandie Shaw, with the song Puppet on a String. The country was involved in a four-way tie, two years later.

Shaw had to perform barefoot on stage, due to her eyesight and she needed to feel where the stage was to prevent herself falling. Singing barefoot has become a prophecy/trend among many artists throughout the contest's history, and ironically, many have earned a respectable placing. 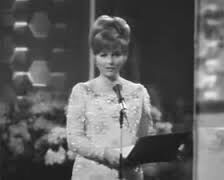 Erica Vaal, the host for the evening 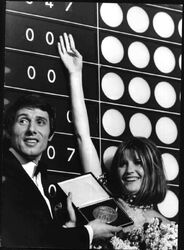 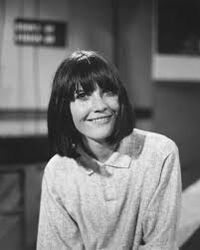 The winner, Sandie Shaw
Add a photo to this gallery

Retrieved from "https://eurosong-contest.fandom.com/wiki/Eurovision_Song_Contest_1967?oldid=32281"
Community content is available under CC-BY-SA unless otherwise noted.