Each country had 10 jury members who distributed three points among their one, two, or three favourite songs. The points were totalled and the first, second, and third placed songs were awarded 5, 3, and 1 votes in order.

If only one song got every point within the jury it would get all 9 points. If only two songs were chosen, the songs would get 6 and 3 points in order.

The Eurovision Song Contest 1966 was the 11th edition held on 5 March 1966 at the Villa Louvigny in Luxembourg City following France Gall's victory in Naples the year before. 18 countries participated with no nations debuting, returning or dropping out, so it was a full house.

Dutch singer Milly Scott became the first black artist to appear at the contest, it wouldn't be until 2001 that one would finally break through and take the victory. Italian superstar Domenico Modugno also made his third attempt at the title but ended up with Nul Points.

Due to Sweden using English in its song Absent Friend in 1965, a language rule was put in place. With that, every country is required to use the languages used in their country.

The contest was won for the first time by Austria with the song Merci, Chérie performed by Udo Jürgens. It was Udo's third attempt at the contest, and this was his most successful. Austria would eventually go on to win again 48 years later, ending the longest wait between victories by a single nation as of now. 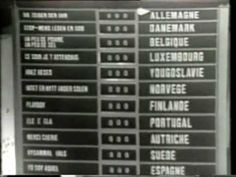